Bernie Taupin Fine Artist. Taupin, a renowned visual artist as well as a multi-award winning lyricist who co-wrote for many years with pop icon Elton John. Bernie Taupin is an artist who expresses himself via words—creating some of the most popular, enduring songs of all time like Tiny Dancer, Candle in the Wind, Rocketman, Crocodile Rock, Goodbye Yellow Brick Road, and Bennie and The Jets. Now uses paint, twine and American flags to create a series of provocative paintings and sculptures. Some of the flags are covered in found objects like barbed wire or rough twine, and some are blowtorched. Some flags have destroyed guitars attached. For Taupin, the pairing pays homage to American roots music.

Bernie Taupin is an artist who has expressed himself in words, creating some of the most popular, enduring songs of all time with Elton John, now uses paint, twine and American flags to create a series of provocative paintings and sculptures.

Bernie Taupin, the storied lyricist, whose collaboration with Elton John is chronicled in ‘Rocketman,’ introduces visual artwork based on his most famous lyrics as a tribute to their 50-year creative partnership.

Bernie Taupin is a music legend (since the 1970s) and visual artist (since the 1990s). Reflections, The Art of Bernie Taupin features a collection of original works and hand-signed limited editions of only 50 prints created as a tribute to his partnership of 50 years with Elton John. Its subject matter is inspired by hit songs the two created together. Through countless chart toppers, his lyrics have spoken directly to the hearts and inspired the spirits of millions around the world (Tiny Dancer, Candle in the Wind and Bennie and The Jets to name just a few). But his profound artistic expression does not end where his words leave off. Bernie Taupin Fine Artist. 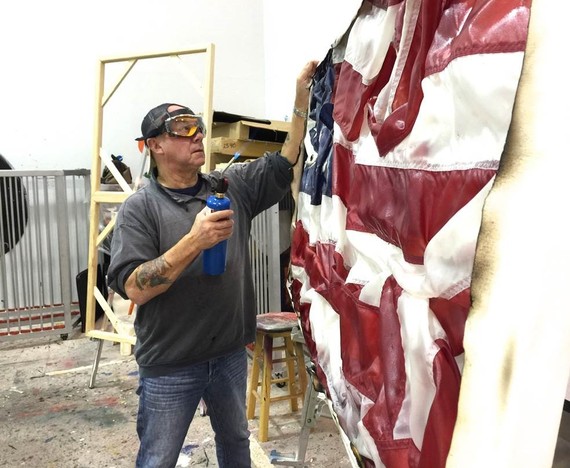 Bernie Taupin has been a lifelong creative. Born 1950 and raised in rural northern England, his childhood playground was among the open fields inhabited by crumbling castles and ancient Roman ruins. His…
Read more

The Earl Scruggs Center in Shelby, NC will be the permanent home of a new exhibit created by Bernie Tapuin, entitled He Will Set Your Fields on Fire. Taupin, a renowned visual…
Read more

Bernie Taupin Sets L.A. Gallery Exhibit of American-Flag Art: “My Day Job Is Being an Artist”

The storied lyricist, whose 50-year collaboration with Elton John is chronicled in ‘Rocketman,’ breaks out more than 20 of his pieces — some of them using burned U.S. flags — on June…
Read more

“The imagination is the most powerful tool artists possess enabling us to conjure up beautiful distraction for the eyes and ears. My dimensional work is simply the visual extension of what I have spent my life creating through words.”

BERNIE TAUPIN is a lifelong visual artist. In the early 1990’s, painting became the main thrust of his creative endeavors. In his early work, Taupin was inspired by groundbreaking Abstract Expressionists including Hans Hoffman, Franz Kline, Anselm Kiefer, and Robert Rauschenberg.

Taupin says, “As in any creative field, we start by emulating work we like, following the path that ultimately leads to finding our own vision, a style we feel is original and unique in its own beliefs, on its own merits.”